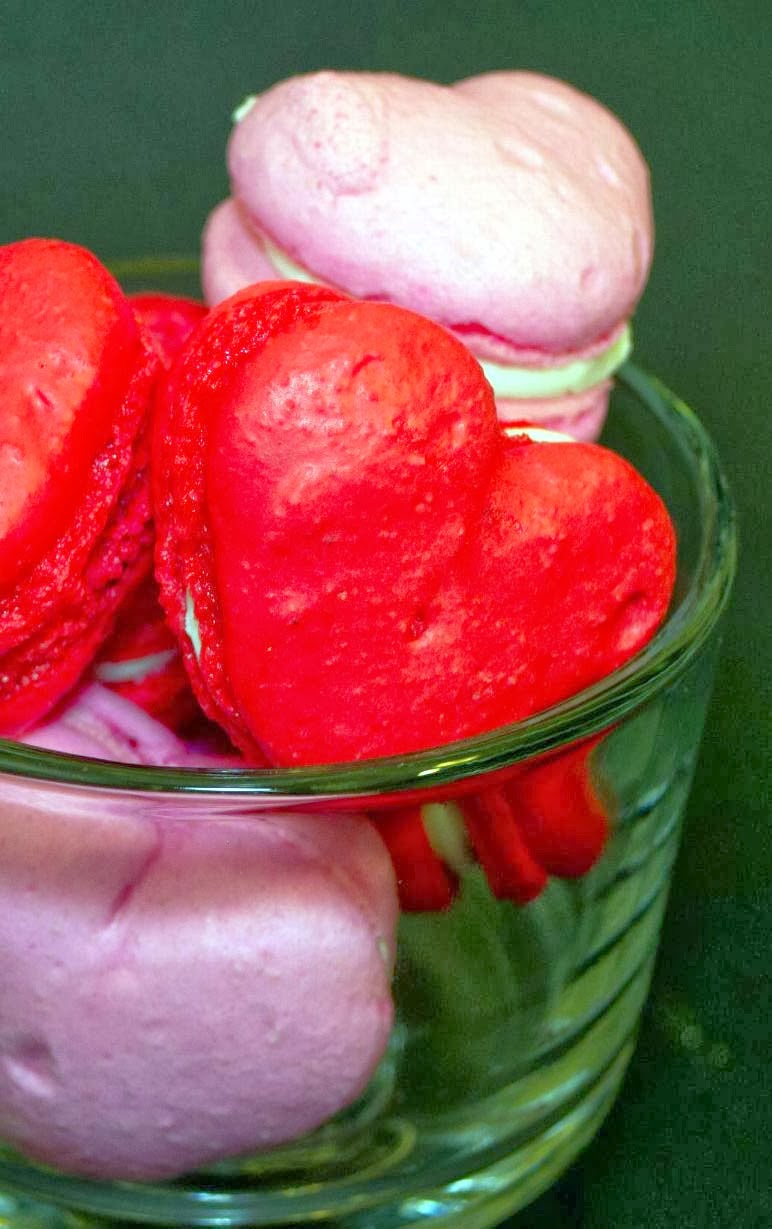 For this Valentine's Day treat, almost any macaroon recipe will work so long as red, pink, or similar colors are used for the right theme. These yummies are made following Martha Stewart's French Macaron Recipe with Swiss Meringue Buttercream fillings. Of course, the macaroons have been formed using a heart-shape baking mold.


For the Swiss Meringue Buttercream

Directions for the Macaroons:

Preheat oven to 375 degrees. Whisk whites with a mixer on medium speed until foamy. Add cream of tartar, and whisk until soft peaks form. Reduce speed to low, then add superfine sugar. Increase speed to high, and whisk until stiff peaks form, about 8 minutes. Sift flour mixture over whites, and fold until mixture is smooth and shiny.

Transfer batter to a pastry bag fitted with a 1/2-inch plain round tip, and pipe 3/4-inch rounds 1 inch apart on parchment-lined baking sheets, dragging pastry tip to the side of rounds rather than forming peaks. Tap bottom of each sheet on work surface to release trapped air. Let stand at room temperature for 15 minutes. Reduce oven temperature to 325 degrees. Bake 1 sheet at a time, rotating halfway through, until macarons are crisp and firm, about 10 minutes. After each batch, increase oven temperature to 375 degrees, heat for 5 minutes, then reduce to 325 degrees.

Let macarons cool on sheets for 2 to 3 minutes, then transfer to a wire rack. (If macarons stick, spray water underneath parchment on hot sheet. The steam will help release macarons.)

Sandwich 2 same-size macarons with 1 teaspoon filling. Serve immediately, or stack between layers of parchment, wrap in plastic, and freeze for up to 3 months.

Directions for the Fillings:

Place whites and sugar in a heatproof mixer bowl set over a pan of simmering water. Whisk until sugar dissolves and mixture registers 160 degrees on a candy thermometer. Remove from heat, and whisk on high speed until mixture is cool and stiff peaks form, about 6 minutes. Beat in vanilla. Use immediately.

Leave meringue in a mixer fitted with a paddle attachment. Add butter, 2 tablespoons at a time, on low speed, mixing after each addition. Beat until smooth, about 3 minutes.

For chocolatey version, see recipe for nutella macaroons.
Posted by declan at 11:28 AM